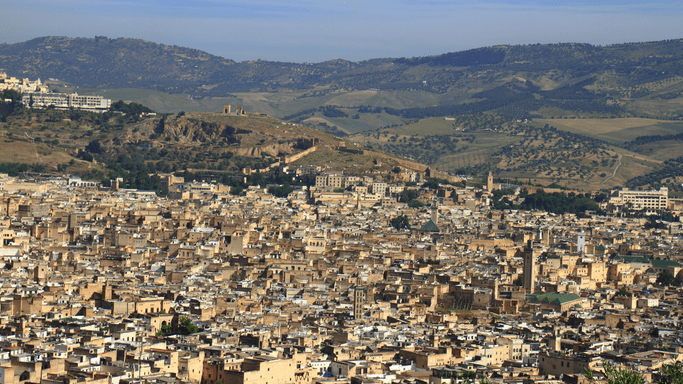 Nothing really prepares the visitor to Fes Morocco for that first step into the Fès el-Bali medina. It’s like traveling backward through time into a medieval city. Fès el-Bali is a UNESCO World Heritage site, and its narrow alleyways comprise the largest urban area in the world entirely free from automobile traffic. Fès el-Bali is home to the oldest institution of higher learning in the world, the University of Al-Karaouine, which has been holding classes continuously since 859 AD.

Prepare to spend hours wandering the Fès el-Bali’s winding passageways, peering into shops, cafes, traditional workshops, dye studios, tanneries, ceramics kilns, mosques, and restaurants, stopping from time to time to shop and sip tea. If you hear someone shout, “Belek! Belek!” step aside quickly: A donkey weighed down with goods is headed your way.

Outside the walls of the two ancient medinas, Fes is a modern city with all the problems modern cities in developing economies are heir to, including occasional strikes and political protests. Still, the boulevards of the French-created Ville Nouvelle (New City) are palm-lined and wide, sporting many fine restaurants, hotels, and clubs.

Table of Contents hide
1 Overview of Fes Morocco
1.1 What is the history Of Fes?
1.2 Trivia of Fes Morocco
1.3 Things To Do and see in Fes Morocco
1.4 Fes Medina Morocco
1.5 The Best Tours from Fes and other Destinations
1.6 The Tanneries of Fes
1.7 The Kairouine Mosque of Fes

What is the history Of Fes?

Fes was founded on the banks of the Fes River in 789 by Idris I, a direct descendent of the Prophet Mohammad. Legend has it that the city was named after the enormous sickle (“Fes” in Arabic) that was excavated from the ground while workmen laid the city’s foundations.

Fes quickly became a mixing pot for North Africa’s indigenous Berber population and the Arabs who had migrated south from the Arab Peninsula. By the 11th century, Fes was one of the world’s largest metropolises, home to 500,000 inhabitants including Berbers, Arabs, Moors, Jews, Christians, and Andulasian converts to Islam. Fes was the capital of Morocco for over four centuries and between the 17th and 19th centuries, a bustling trading port along North Africa’s Barbary Coast, a region that included not only the shoreline but also inland cities and towns under Berber (“Barbary”) control.

“Fes blue” is the name given to the color of the ceramics produced by Fès el-Bali’s potters, a hue somewhere between cobalt and the color of the sky on a brilliant, sunny afternoon. Manufactured from local minerals, the dye’s exact formula is a well-guarded secret.

The brimless, red, tasseled hat synonymous with Arab nationalism is called a Fez (old spelling of Fes) because it originated in this city.

Things To Do and see in Fes Morocco

There are so many things to do and see in Fes that a guide like this one can only begin to scratch the surface. Here are a few of the standout venues.

The city’s premier tourism destination is its old city or medina. The medina’s twisting alleys and streets are difficult to navigate. The prudent traveler will engage the services of a guide before he or she goes, through a recommendation from a hotel concierge or riad-keeper. Tourists can also hire guides when they enter the medina. Official guides will be wearing gold medallions on their chests. If you choose to go it alone, remember that all roads lead to the main gate, the Bab Bou Jeloud.

The old city is divided into two parts: the old medina Fès el-Bali, which was built in the 9th century AD, and the new medina Fès el- Djedid, which was built in the 13th century. The former is a marketplace, crowded with souks, shops, cafes, and artisans’ studios, where exotic smells and colors assault the senses; the latter is far more serene, surrounded by imperial palaces and gardens from Fes’s royal past, laid out in an almost grid-like symmetry.

The Best Tours from Fes and other Destinations

The Tanneries of Fes

In the midst of the bustling passageways of the old medina lie the leather prep and dying pits. Here, the leather for which Fes is famous is worked the same way it was in medieval times. This is artisanship that has hardly been touched by the Industrial Revolution.

Caution: A tannery visit is not advised for travelers with bad stomachs. The leather is initially prepped with uric acid to soften it, and the most consistent source of uric acid is animal and human urine. Bring along a sprig of mint to sniff.

The Kairouine Mosque of Fes

This Islamic house of worship is over ten centuries old and a beautiful example of architecture that marries function with aesthetics, for it has grown as Fes itself has grown. While the mosque is off-limits to people who don’t practice the Moslem faith, the buildings’ doors remain open and travelers are allowed to look into its hallways.

Several of the 13th century Medersas (religious schools) surrounding the mosque is open to visitors, and allow visitors to take in the breathtaking views of the medina from their rooftops. The walls of these Medersas are decorated with geometric stucco and woodcarvings that took medieval artisans decades to complete.