Enjoy Historical monuments in Morocco. The Kingdom of Morocco enjoys multiple advantages that make it one of the main tourist attractions in North Africa and the Arab region as a whole, and according to the statistics of the World Tourism Organization, it was at the top of tourist destinations in 2016.
In addition to the wonderful and moderate weather in most of the year, the Kingdom of Morocco has ancient tourist sites that attract the attention of its visitors without others, which we will focus on in this article Historical monuments in Morocco.
The following are the most famous ancient tourist places in Morocco: 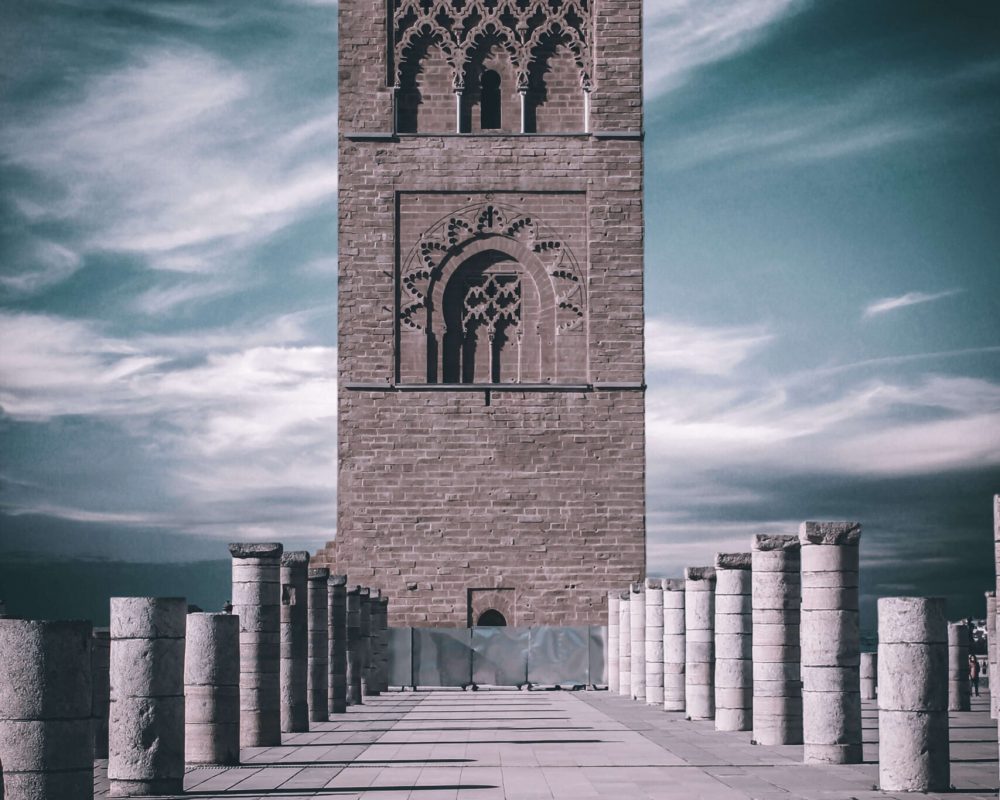 The Hassan Tower is one of the historical buildings in the Moroccan capital of Morocco, a view built in the era of the Almohad state.
The “Hassan Mosque” was established according to the order of Ya`qub Al-Mansour in the year 593 AH (1197-1198 AD). The UNESCO Heritage Organization added this site to a preliminary list on July 1, 1995, in the category of culture.

Al-Qarawiyyin Mosque, or Al-Qarawiyyin Mosque, is a mosque in the Moroccan city of Fez, built in the year 245 AH / 859 CE, built by Fatima Al-Fihri, where she donated everything she inherited to build the mosque.
The people of Medina and its rulers were expanding and restoring the mosque and carrying out its affairs.
The Zinati princes, with the help of the Umayyads of Andalusia, added about 3 thousand square meters to the mosque, and after them, the Almoravids carried out another expansion.
The mosque was called al-Qarawiyyin, in relation to Kairouan, the city of Fatima al-Fihri. 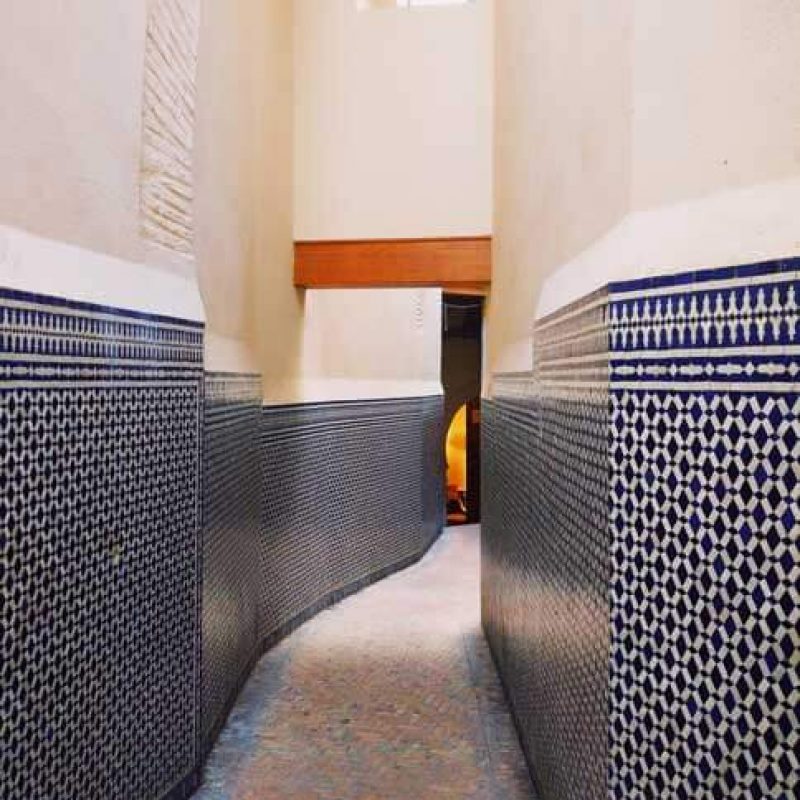 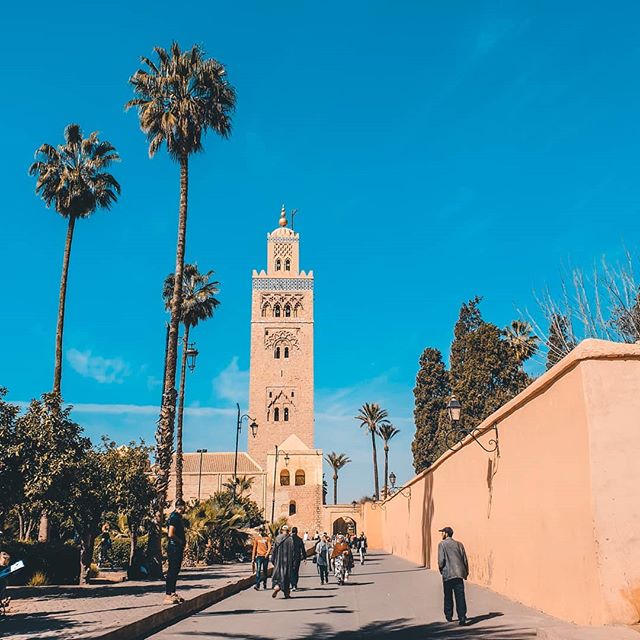 It is the largest mosque in Morocco, built-in 1150 and a height of 65 meters, and to this day it remains a religious center of worship.
The Koutoubia Mosque is one of the Islamic monuments firmly in the history of Morocco.
The Koutoubia Mosque is in the middle of Marrakesh, near the Jemaa El Fna Square.
The name of the mosque is derived from “the Ketbiyen”, which is the name of a bookstore that was believed to be near mosques.
The Koutoubia Mosque is one of the most important mosques in Morocco. It has exceptional large dimensions, occupies 5300 square meters and consists of 17 wings and 11 domes with relief space. In it the majestic decisions of the sultans and major events took place. The mosque and its minaret, decorated in its upper parts with a ceramic frieze painted in turquoise, became a symbol of the city. As for the great Koutoubia platform, it is equipped with an automatic movement system that is considered one of the masterpieces of the Islamic art of carpentry. This pulpit was made in Córdoba at the beginning of the twelfth century at the request of the Murabati Ali ibn Yusuf ibn Tashfin for the mosque that he finished building in Marrakesh. Transferring the pulpit to the Koutoubia around the year 1150

The Bahia Palace, located in Marrakesh, whose construction dates back to the era of the Alawite state of Minister Ahmed bin Musa during the reign of Sultan Abdul Aziz, head of state affairs at the time, nicknamed “Ba Hammad”, where the latter brought the most skilled craftsmen and craftsmen to work in the palace for six consecutive years, except Inevitable fate prevented him from seeing the palace when he passed away in 1890 and the work is not over yet. It is one of the most famous historical monuments in Marrakesh.
It is the largest mosque in Morocco, built-in 1150 and a height of 65 meters, and to this day it remains a religious center of worship.
The Koutoubia Mosque is one of the Islamic monuments firmly in the history of Morocco.
The Koutoubia Mosque is in the middle of Marrakesh, near the Jemaa El Fna Square.
The name of the mosque is derived from “the Ketbiyen”, which is the name of a bookstore that was believed to be near mosques. 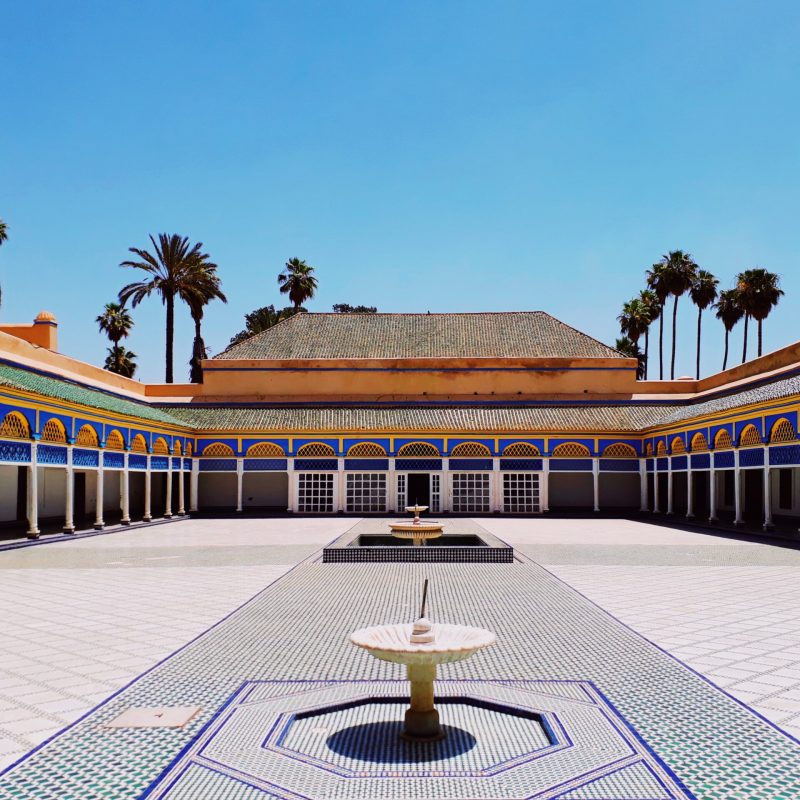 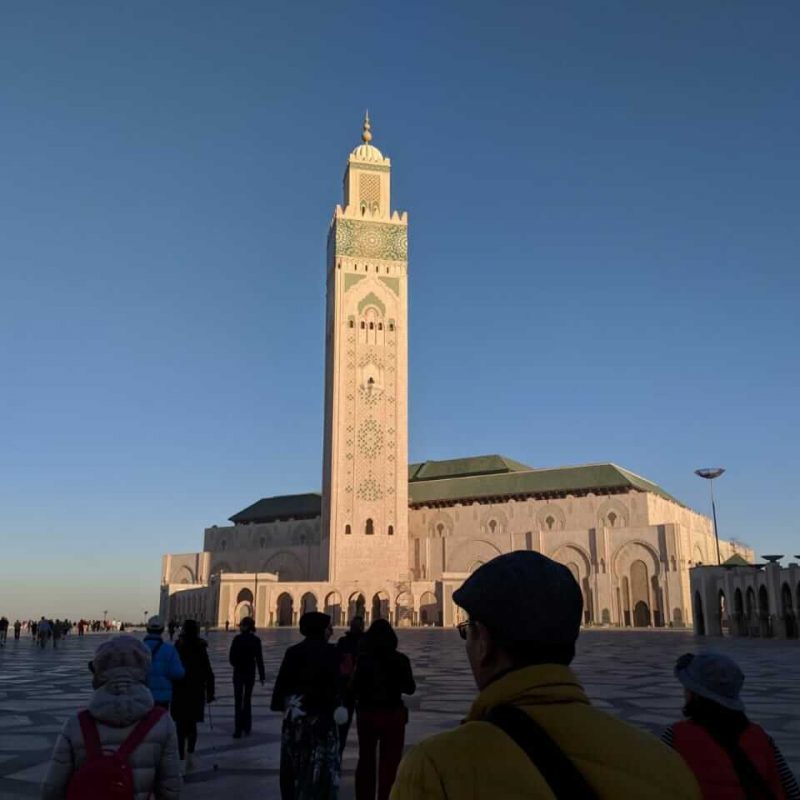 Hassan II Mosque The mosque is located on the coast of Casablanca, Morocco, it is the largest mosque in the country, the second mosque in Africa, and the thirteenth in the world, the Andalusian minaret, floor 210 meters (689 feet), which is the second-highest religious building in the world.
It began to be built in 1987 AD, and its construction was published on the night of the Prophet’s birthday on Rabi` al-Awwal 11, 1414 AH / August 30, 1993, during the reign of Hassan II’s reign of Morocco.
The problem of children is formed, this verse forms in the mosque, culturally integrated, and built on the sea with an area of ​​9 hectares (acres), the ablution hall, the bathroom, the Quranic library, the library, and a museum. In addition to cladding with “zellij” or colored ceramic mosaic decoration on the columns, walls, and the sides and edges of the minaret, and the carving on cedarwood, which binds the plate, and the colorful carved plasterwork in the cornices and cornices.
The prayer hall, with an area of ​​20,000 square meters, can accommodate 25,000 worshipers in addition to 80,000 worshipers in the courtyard. The mosque has modern technologies, the horizontal surface (it opens and closes automatically) and the laser beams have a range of 30 km in the direction of Makkah.
The construction of the project of the Moroccan Foundation Bimaro began